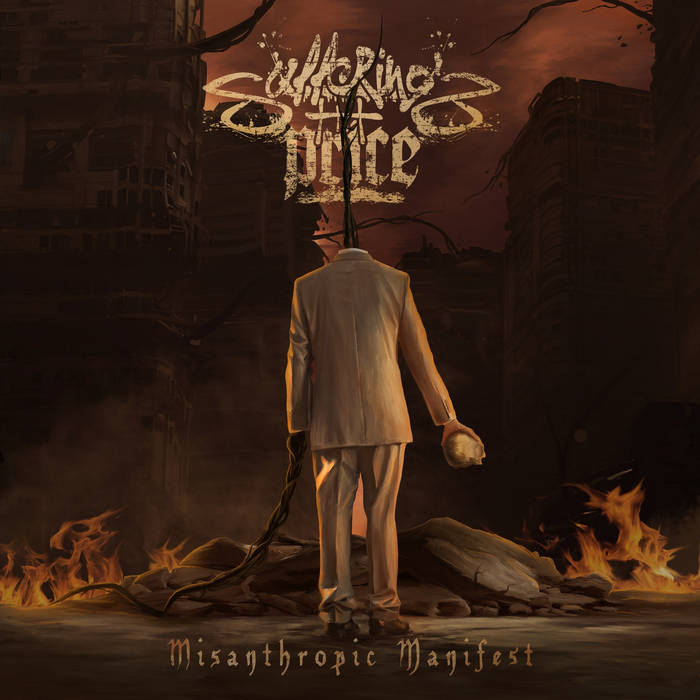 We would like to thank our friends and families for supporting us in our endeavor. Everyone who worked or helped us make this album, thank you - you know who you are. Yes, the usual crap and cliche. In the end, we’d like to thank the society rapidly falling apart and giving us endless inspiration and motivation to writing “Misanthropic Manifest”.

A special thanks go to our friends and brothers who contributed to this album. Miloš Marjanović (Violent Chapter) guest vocal on “Conversation With Self” and Nikk (Overpain/Hollow Crown/Busted Jawz), guest vocal on “Faulty Structure”.

The album was recorded in Kuhinja Studio in 2019. Mix and Master by Sava Tomić. Artwork by Eddie Wiseman (Eduard Tokoš).

The band was formed in 2011 in Nis/Serbia by the former members of Bitumen, with a few line up changes and a lot of shows in our country the band has become one of the most Brutal hardcore bands in Serbia. We released our first album "Skull Tower" in 2014 with the cooperation of Good Life recordings from Belgium. ... more

Track Name: Conversation With Self (ft. Milos Violent Chapter)
The prophecy from our past now makes sense at last
It’s all coming to the realization, clouds are coming, there’s no turning back
It’s too late to fix the truth embrace the consequences around you
You’re null, you’re unimportant, killed by ego and selfishness.

I am the man I’m the ruler, show respect in my domain
I believe in none but myself, your powers are worthless here
Can’t you see I’m in control, nature, land, water, and sky
Deities are thing of the past, undying creatures swim in oblivion now

I am no god but I’m here to judge you
If you’re so high then I’m right above you
I am a man just as you are
The fault is mine too, we play the same part

We came to a point of no return.
The circle’s complete.
We just love to be abused.
It’s how we are made.
The storm was in slumber.
Now it’s time to rise again.
Lay down your weapons,
Start using your mind.

The culture of violence, control, sublime.
Paid in blood for a goal divine.

Unipolar world, on the road to humanity.
Blessed with the force of bureaucracy
Anti-rules justify its executioners.
Track Name: Forgotten Ghosts
Come to me my brother, have a closer look.
See all those rotting corpses? They're as same as you.
These were our fathers, our sisters too.
Left here to be forgotten and buried with the truth.

Now you know what’s in front of your eyes.
You can see through sugarcoated lies.
Feel the presence of the past,
We’ll guide you through the darkest night.

Liars! Uniformed in front of your eyes.
Heroes! Long forgotten ghost of our lives.
Traitors! Preach to be your friends.
Heroes! Don’t let them be murdered again.

Uniformed in front of your eyes.
Long forgotten ghost of our lives.
Preach to be your friends.
Don’t let heroes be murdered again.

Now get up and say
I’m here and I won’t go away
You can’t blind me from the truth
I know the way, I know where to find you

Now get up and say
I’m here and I won’t go away
You can’t blind me from the truth
I know the way, I know where to find you
Track Name: Faulty Structure (ft. Nikk Overpain)
I look at your face fear is all I feel.
You cannot fool me with a smugging smile I see.
I’ve seen the future the end is drawing near.
Lies and crafty squires have no power here.

You were marked from the first time you embraced the cradle of filthiness
Plaguing humanity with vices they can’t handle
Subliminal trust towards a false aegis
Constructive hate against a faceless enemy.

All control lost to uncertainty
Aspects of peace became a matter of controversy
Burial ground in each step we make
“Clutch” moments in every breath we take
Sacrifices on the altar of gain
Do or suffer cause time only brings pain
Track Name: Eden
Welcome to the Eden
This is what we call a civilized world
You’re free to speak and think
As long as you do what you’re told

Welcome to the future
Remember 1984?
It still guides us so well
We did it all, just as good book has foretold

You’re still confused?
You need more assuring
Let me show you where the crops are grown
Let me show you our infants are born
Please believe me there’s nothing more you need
This is the future this is where you live

This must be fiction, I must’ve been dreaming
This isn’t the world that I live in
I don’t remember when it all went wrong
It can’t be this bad, it can’t be, so wrong

What are you doing?
Have you gone mad?
You had a wolfpack,
And turned it into a flock.

We’re few in numbers,
Don’t make us choose sides.
You can hate me forever,
But let others decide.

You are the cancer,
But we’ll be fine.
Surviving is what we do best.
Come on, this shit goes down.

You are the cancer,
But we’ll be fine.
Surviving is what we do best.
Come on, this shit ends right now.
Track Name: Neither
I don’t wear any colors
I never take sides
There’s no church I believe in
No ideology I consider right
I trust myself an no other
Carefully pick every fight
Please stop trying to label me
You can’t classify my life

Yeah, you better believe it!

There is no rule that can band me
There is no-one that can change me
I’ll always stay true to myself
I’m far from perfect, but I know who I am

I’m far from perfect, but I know who I am
Track Name: Misanthropic Manifest
Lifeless souls staring at the screen
Empty heads obedient on a leash
There are no more friends, there are no more enemies
Only fools and foes being social hoes

Why do you still trying? Is that what you call living? Degraded in every way, estranged from giving.
This is my manifest, depiction of my hate. Straightforward misanthropy, both for you and for me.

Lifeless souls staring at the screen
Empty heads obedient on a leash.

I wait for the apocalypse, I want it all to end, I see no future, I wish we all die today.

It’s not the leaders, it’s not their fault.
We’re bad as a species, we’re destroying out of control
We’re a glitch in the system, we’re evolution’s flaw.
Overconfident apes, evil to the bone.

Let’s face the truth, let’s do the right thing for the first time.
Eradicate the human race, leave this world to rest.
Straightforward misanthropy both for you and for me.

Bandcamp Daily  your guide to the world of Bandcamp

Guests include Kassa Overall and Muriel Grossman, plus an LP of the week by Van Hunt.